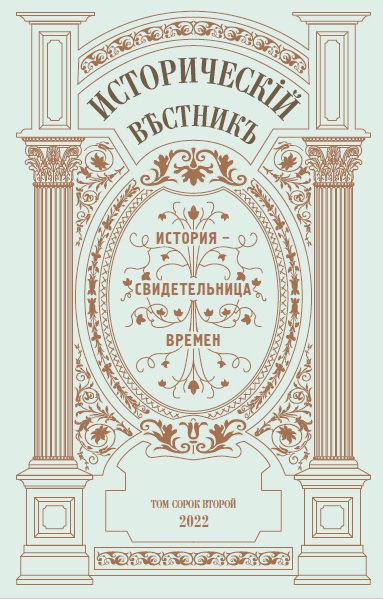 This issue of the Historical Reporter deals mostly with the Russian history of the 19th and 20th centuries, as well as the documents from that era. Much of the literature in the issue focuses on the Soviet period, starting with the events of the Russian Civil War and ending in the not-so-distant past. We are trying to widen the scope of issues that the journal covers, and we hope that this issue will become a notable milestone.

The issue begins with an article by Kamil A. Magomedov, dealing with the principal components underlying the government of the Imamate of Dagestan and Chechnya between 1834 and 1859. The study offers a comparative analysis of the Imamate’s legal system and presents insights given by distinguished Muslim scholars. The paper by Maksim M. Stelmak and Dmitry I. Petin focuses on the Russian Civil War, covering the work of Ivan Adrianovich Mikhailov, a well-known anti-Bolshevik figure and the so-called Grey Eminence of the White Army’s Omsk, who served as Minister of Finance under the Alexander Kolchak’s Government of 1918–1919. Women’s emancipation after the October Revolution is the focus of a paper by Yana V. Gorbatenko, which examines the case of female physicians who worked at the First Leningrad Medical Institute. The study by Alexander I. Golovlev reviews the historical background of legislation on culture, examining the relationship between the state and theater in the 1990’s. Somewhat thematically «out of place» is the piece by Dmitry E. Mishin on the Sassanid policy in Lower Euphrates (7th c.). This is how we pay homage to the field of General History, all the more so because we have repeatedly explored the peculiarities of this region’s history in our journal.

The Sources section turned out to be rather broad and we are pleased to present our readers with some contributions from our regular writers. Vladimir V. Hutarev-Garnishevsky presented some documents reflecting the interdepartmental struggle of the Ministry of Internal Affairs and the Ministry of Foreign Affairs of the Russian Empire amid the political and religious destabilization in Bukhara in 1910–1916. Another study dealing with the Civil War is by Ruslan G. Gagkuev and Dmitry I. Petin, which presents an archaeographic analysis of the memories of Nikolai I. Rogozin, a Cossack officer who participated in the Civil War. This is the first time this source is being brought into scholarly circulation in its entirety. Grigory N. Lanskoy has produced three essays written by five French scholars and authors, where they justify the French version of Eurocommunism while holding social-democratic and moderate-communist views.

The IN MEMORIAM section features a manuscript by our dearly departed friend and colleague, Leonid Fridovich Katsis, who served on the journal’s Editorial Board. This was the last work he wrote for the Historical Reporter. It explores the connections between Russian revolutionaries and cultural figures that were in some way or another affiliated with the revolutionary movement in Russia at the turn of the 20th century.

And it is to the blessed memory of our dearly departed colleague that we dedicate this issue.

Kamil A. Magomedov. Features of Imamate of Dagestan and Chechnya as Islamic power (1834–1859)

Maksim M. Stelmak, Dmitry I. Petin. «He fulfilled his ambitions in the presence of Kolchak»: Minister of Finance I.A. Mokhailov as seen by contemporaries

Yana V. Gorbatenko. Academic сareers of women at the Higher Medical Schools and Universities of Leningrad in the 1920’s: on the example of the First Leningrad Medical Institute

Alexander I. Golovlev. State and Theatre: on the Issue of legislative regulation of theatre industry in the Post-Soviet Russia, 1991–1999

Dmitry E. Mishin. After the Lakhmids: Sasanid Politics towards the Arabs of the Lower Euphrates region in the first third of the 7th c.

Vladimir Hutarev-Garnishevsky. Ministry of Internal Affairs vs Ministry of Foreign Affairs. The interministerial struggle during the religious and political distabilization in Bukhara, 1910–1916

Ruslan G. Gagkuev, Dmitry I. Petin. The Civil War in Kuban as depicted in memoirs by Nikolay I. Rogozin

Grigory N. Lanskoy. USSR and us

Leonid F. Katsis. To the problem of restoration of the Russian revolutionists’ contacts structure