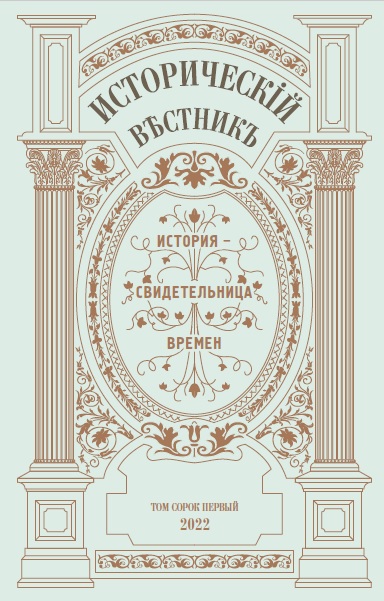 Dear Readers! It was ten years ago, in the fall of 2012, that the first issue of the relaunched Historical Reporter came out. Ten years is quite a feat for any journal. Over these years, we have come a long way, one that was not always easy, but never dull. We have established a team of talented authors and taken our rightful place as one of Russia’s leading journals on historical science. Since the first issue, we have compiled and published a vast array of sources and studies on Russian and global history, covering virtually all issues and timelines from classical antiquity to the present day. The journal features papers both by prominent Russian and foreign historical scholars and by younger authors who are just beginning their scholarly careers. Our editorial board is comprised of exceptionally brilliant and unique individuals, and we are proud of each and every one of them. Our journal lives on and we will do everything necessary to keep the Historical Reporter serving Russia and its science.

The Historical Reporter was listed among the journals recognized by the Higher Attestation Commission of the Ministry of Education and Science of the Russian Federation. This is a milestone event, a culmination of the joint efforts of our authors, editors and the editorial board. Here we would like to thank the Russian Historical Society, for their patronage, as well as the RAS members Alexander O. Chubarian and Efim I. Pivovar for their active support. We would also like to say a special thank you to the Nikokhim Group leadership for their understanding and many years’ worth of assistance. On behalf of all my colleagues and like-minded people, I would like to express my deepest gratitude to our wonderful authors, who have contributed their ideas and unique findings to the journal. Without you, dear colleagues, the Historical Reporter would not have lasted a single day.

This 41st issue of the journal is dedicated to a great variety of topics on general history. It opens with a study on the Grand Embassy of Peter the Great by Nikolai N. Petrukhintsev. The author concluded that the «Grand Embassy resulted not in the Tsar’s growing affection for Europe, but in an outspoken disappointment in European political principles and in the attitude of several European countries toward Russia». This famous tour freed the Tsar from many illusions about Europe and gave him his first lesson in politics. The study hereby dispels the belief that the young Tsar returned from his travels all the more .enchanted by Europe. — a myth that firmly entrenched itself in our historical tradition. The following study by Andrei V. Venkov also focuses on national history. It examines the formation of the Don Cossack Generalship in the second half of the 18th century, resulting from the incorporation of the Don Cossacks into the political and military structure of the Russian Empire.

Studies by Salavat M. Iskhakov and Vladimir A. Nevezhin focus on the Soviet period of our history. Salavat M. Iskhakov’s paper presents new data on the 1920–1930s activities of Cafer Seydamet, a famous Crimean Tatar public figure and an emigrant. Moreover, it highlights some aspects of the ethnic and national issues in Crimea during those years. The study by Vladimir A. Nevezhin examines the reaction of the Soviet leadership to the flight of Rudolf Hess to Great Britain, taken in the context of the relationship between the USSR, Germany, and Great Britain just before the hostilities on the Eastern Front of WW2 began. Gregory N. Lanskoy’s study on World History examines the history of Russia as an object of global methodological research. It explores the trends and concepts that manifest themselves in research into Russian history done by both Western and Russian scholars. As is the tradition, the journal also touches upon Oriental topics. This time, it is represented by Dmitri E. Mishin’s paper, entitled Mutual Perception of Persians and Arabs in the Pre-Islamic Era.

Nikolay N. Petruhintsev. The Grand Embassy of Peter the Great as part of the «Eastern Project» and foreign policy crisis of 1698

Andrey V. Venkov. The emergence of the Don generals

Vladimir A. Nevezhin. Reaction of the Soviet Leadership to Rudolf Hess’s Flight to England (May–June 1941)

Dmitry E. Mishin. Mutual Perception of Persians and Arabs in the Pre-Islamic Era

Yuri M. Kobishchanov. The Theory of the Great Feudal Formation

Svetlana A. Kirillina, Pavel V. Shlykov. Waqfs in the International Ottoman Studies and Professor Mikhail Meyer’s Contribution to the Field

Mikhail S. Meyer. The Role of Waqfs in the Development of the Ottoman Cities in the 15th—16th Centuries

Yuri A. Osipov. On the history of the «Toropetsk’» Icon of the Mother of God