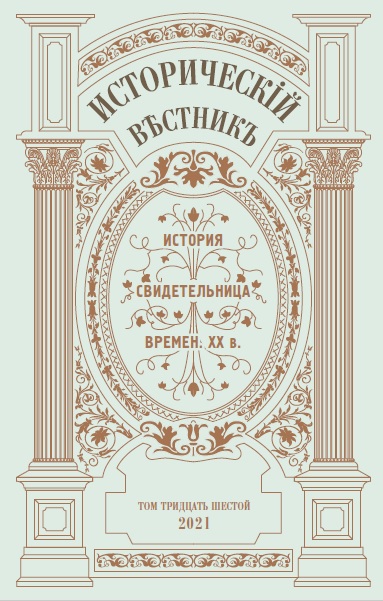 The current issue of the «Historical Reporter» focuses upon the last years of the Russian Empire and the first 20 years of the Soviet era. Examined are the problems in connection with economics, social moods, foreign and domestic affairs, wars. revolutions, cross-ethnical and interfaith relations.

Among the highly debatable issues in modern historiography which attract public attention is the definition of the development level of the Russian Empire at the beginning of the 20th C. The article by Vladimir V. Polikarpov is dedicated to this fundamental question. The author reveals the situation within the Russian Navy during the revolutionary shifts in the ship-building machinery and the rapid preparation for the upcoming European war. He carefully evaluates the scientific and technical levels.

Another fundamental problem in modern historiography is an analysis of the attitudes of various Russian Empire regions towards the parliamentary system, and the level of the voters’ trust towards the government at the beginning of the 20th C. Nadezhda S. Sidorenko and Stanisalv V. Musatov in their article examine the publicity and social moods of the Ural region.

The emergence of the Soviet multinational state — is one of the fundamental and widely discussed issues in world historiography. Many aspects from the history of its origin and existence, especially in the regions, and periphery lands are not yet explored. The process of the Don Cossacks self-determination in 1918 is depicted in the article by Andrey V. Venkov, and self-identification of the Crimean Tatars during the interbellum period is examined in Salavat M. Iskhakov’s article.

In the «Scientific Thought» section published are the reviews by С. Kumuk (Turkey) of a book by young Turkish historian E.B. Atmaca, dedicated to the views of Turkish political emigrants from 1920--1930 on the Kemalist and the Bolshevik revolutions, and a review by Junbae Jo (South Korea) of a book by famous US historian S. Kotkin about Joseph Stalin in 1929–1941.

In the «Sources» section for the first time are published documents that significantly reveal the situation in the South Ural region. The documents reveal Soviet government politics in this multiethnic and multi-religious area on the border of Europe and Asia, and its actions within the extreme, sanitary-epidemiological among others circumstances of 1919.

Vladimir V. Polikarpov. The Imperial Russian Navy in the Epoch of Turbomachinery: On the history of the arms industry

Nadezhda S. Sidorenko, Stanisalv V. Musatov. The State Duma of the Russian Empire as depicted in press and public opinion of Urals

Salavat M. Iskhakov. The Striving of Crimean Tatars for Self-determination (1917 — end of 1930s)