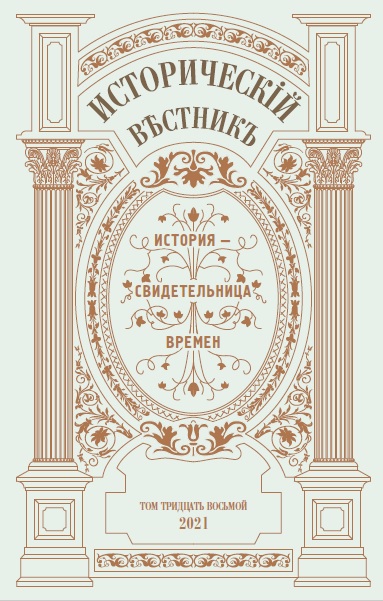 The December issue of the Historical Reporter this year may, at first glance, look like a standard issue on general history. In this case, the initial impression is wrong. What sets this 38th issue apart is that it’s comprised entirely of articles penned by members of our editorial board or sources prepared by them for publication. We’ve been toying with the idea of releasing an issue like this for quite some time. It is only now that we have finally gotten around to releasing an issue prepared entirely for publication by the people who have, for many years now, been dedicating their efforts and talents to our common cause, working tirelessly on the editorial board.

Every author has contributed material that is, in one way or another, related to their field of research. This makes the current issue especially memorable and interesting, proving that our editorial board has members specializing in practically every aspect of history.

The issue starts with the National History section and an article by Gregory N. Lanskoy, which focuses on the link between the development of national history as a science and the political practices of the Russian state between the early 18th century and the early 21st century. The article by Alexey E. Titkov continues the topic of national history, focusing on a problem that has recently been the subject of extensive scholarly research – the impact of external factors on the activities of the Bolshevik leadership before and after the 1917 coup. In the article, the author examines Vladimir Lenin’s foreign policy during the early years of the newly-established Soviet state. The National History section ends with an article by Arutyun A. Ulunyan, which dwells on some of the lesser-known aspects of relations between the USSR and Great Britain in 1924 — the so-called Asian backstage diplomacy and its impact on the establishment of relations between the two nations.

The Global History section is just as interesting and varied, covering a broad range of topics from the Crusades to the modern United States. Sergei P. Brun contributed an article about the civilizational struggle between the West Franks and their compatriots who had been born and brought up in the conquered Holy Land, and absorbed its culture and traditions. This article is a great read for anyone, not just those specializing in medieval history. An article by Svetlana A. Kirillina and Dmitriy R. Zhantiev deals with Bonaparte’s policy towards the local Christians during his Egyptian campaign. Taras Yu. Kobischanov also contributes an article dealing with the Napoleonic era, highlighting the internal problems of the Ottoman Empire brought about by the French invasion of Egypt. What makes all these studies especially valuable is that they deal with some lesser-known periods of global history that often get overlooked in mainstream historical science. The section ends with an article by our US colleague Todd Lefko that offers a deep analysis of the processes currently underway in the modern US and is published in the original version.

The Memoirs section offers a journey down memory lane of Efim I. Pivovar, replete with memorable vignettes of Soviet times and reminiscences about friends and colleagues, serving as a memorial to these wonderful people.

The Sources section offers content on par with those pieces found in the other sections. It contains an important source on Turkmen history from the late 19th to the first third of the 20th century prepared by Salavat M. Iskhakov. Vladimir V. Hutarev-Garnishevsky presented an excerpt from the diary of Nikolai Vishnyakov, a prominent Moscow City Duma member in the prerevolutionary period. We note this most interesting source on Moscow history will be fully published. Sergey V. Deviatov has given us an opportunity to read the documents on the last day of the Soviet Union and the first day of the new Russian Federation.

Dear friends and colleagues! We wish you a happy New Year! May you be in good health and good spirits, and may you accomplish even more for Russian science. We hope that our publications will continue to spark your interest in the upcoming year. Meanwhile, we will do all we can to make our magazine even better.

Alexey E. Titkov. Russian Factor in the Military and Political Conflicts of Europe in 1917–1920

Arutyun A. Ulunyan. «Asian Backstage Diplomacy» in Building Bridges Between the USSR and Great Britain in 1924

Sergey P. Brun. The Franks of Outremer and their Western Brethren: examining the conflict through Roman Expansion in the Principality of Antioch and County of Tripoli (1230’s—1280’s)

Svetlana A. Kirillina, Dmitry R. Zhantiev. Bonaparte’s Expedition to Egypt and Syria (1798–1801) and His Policy towards Local Christians

Taras Y. Kobishchanov. The Highwaymen from the Great Sultan Road: the Fight of the Grand Vizier against the Cilicia’s Derebeys during the Campaign against Napoleon Bonaparte of 1799

Todd Jeffery Lefko. The New World From an American Viewpoint

Efim I. Pivovar. First Job in the Profession I Trained For

Vladimir Hutarev-Garnishevsky. The battles of October in Moscow: Through Witness’ Eyes

Sergey V. Devyatov. The last day of the life of the Soviet Union. The first day of the existence of the Russian Federation. December 25, 1991