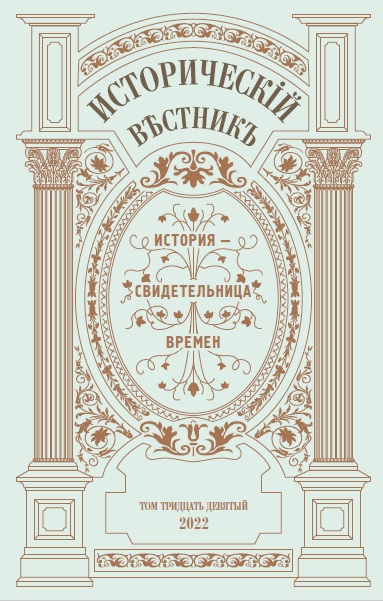 This issue of the Historical Reporter focuses on the decline of the Russian Empire and the first twenty years of Soviet history, analysing ideological and economic issues, problems of domestic and foreign policy, as well as reforms and revolutionary transformations that the country went through.

The study by Victor I. Goltsov demonstrates that the official ideological tenets of the Russian autocracy in the 19th and the early 20th centuries ignored the intrinsic causes for liberation movements in the multi-ethnic and multi-confessional society of the Russian Empire. The ideology disapproved of constitutionalism and democracy; the authorities used the church as an instrument of power, relying on traditional, conservative values and unconditional love for everything that is Russian — the so-called hurrah-patriotism.

One of the fundamental issues in modern historiography is evaluating the economic development of the Russian Empire in the early 20th century. Vladimir V. Polikarpov addresses a facet of this issue, offering an analysis of the Russian submarine building industry in 1917, comparing it to that of other countries such as the United Kingdom, Germany and the USA.

The famine that struck several major regions of Soviet Russia in the early 1920s received a great deal of international attention, including that of the United States. The study by Nail V. Usmanov presents data on the work of the American Relief Administration in the Volga region and the Urals. Thanks to them, hundreds of thousands of lives have been saved. The work details the attempt of Americans to establish economic cooperation between the United States and Russia.

In his analysis, Andrei V. Venkov investigates why the USSR military service restrictions were quickly lifted from the Cossacks in 1936, despite their widespread involvement within the White Army during the Russian Civil War. The study also details the aims of the large-scale propaganda campaign mounted in connection with this event.

Discourse on the essential features of Soviet national policy is yet another fundamental issue in global and Russian historiography. The study by Salavat M. Iskhakov focuses on the political emigration of Muslims from the Caucasus, Crimea, the Volga region, the Urals and Central Asia, who ended up in Europe during the interwar period. The paper presents their interpretation of the situation and prospects of the multinational Soviet Union.

Cem Kumuk (Turkey) reviews the biography of Said Shamil, the grandson of Imam Shamil. Said participated in the Civil War in the North Caucasus and later emigrated from the Caucasus. The study is based on the documents found in Polish, Russian, American and French archives, which are now being revealed to the scholarly community for the first time.

The Sources section features an expanded edition of documents compiled by Gennady V. Mordvintsev. These sources shed light on the situation in the Southern Urals — the policies that the Soviet government adopted in this multi-ethnic and multi-confessional region, where the situation (including public health and epidemiologic safety) deteriorated considerably during the turbulent year of 1919.

Victor I. Goltsov. Official Ideology of the Autocracy in the 19th — Early 20th Centuries

Emergency Government in the Southern Urals — Records from the Ufa Provincial Revolutionary Committee, 1919.