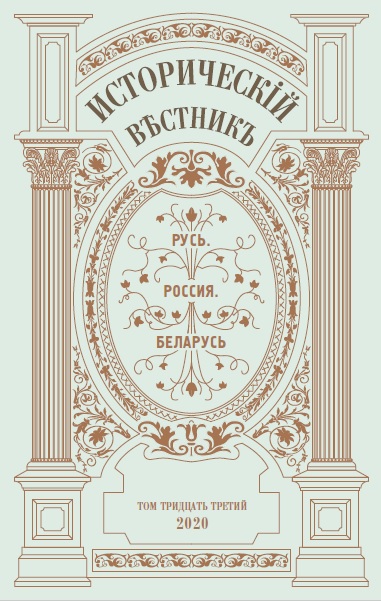 The historical fate of two neighbouring countries — Russia and Belarus — are closely intertwined, with their connection spanning back centuries. The current issue of The Historical Reporter is dedicated to Russian-Belarussian relations. We hope that Russian readers will have this chance to encounter the research of contemporary Belarussian scholars, working in various academic centres. Historians from both countries naturally encounter problems, brought about by the conflicts between Eastern Slavic countries and many years spent alongside one another in the united imperial landscape.

Jauhien S. Hlinski examines the theme of migration from Moscow into the Grand Duchy of Lithuania in the dynastic the histories of local szlachta families. Despite numerous wars between the Polish-Lithuanian Commonwealth and the Russian Tsardom, the appeal to the «Muscovite» roots served as the basic argument of the lesser or landless szlachta in their attempts to be recognized as full-scale nobility.

Andrei V. Macuk studies the «kingless» year of 1733 in the Polish-Lithuanian Commonwealth, during which Russia and Austria both actively intervened in the election of a new king.

His Russian colleague — Kirill A. Kochegarov dedicated his work to the conflict around the nomination of the Archimandrite of Slutzk, one of the leading Orthodox centers in the Grand Duchy of Lithuania. The «Muscovite» Metropolitan of Kiev and his consistory faced staunch opposition from local Orthodox brotherhoods, the latter being directly patronized by a Catholic benefactor of the Orthodox Church in the Principality of Slutzk, Jeronimus Florian Radzivill.

Vadzim Anipiarkou explores the real history of the relationship between the Russian military and representatives of the Targovitzy Confederation (1792–1793), which was created at the initiative and in the direct interests of the Russian Empire, being aimed at the restoration of Russian influence in the Polish-Lithuanian Commonwealth.

Andrei Unuchak exhibits how Russia and the imperial policies (including those that were directly aimed at Belarus) were portrayed in the Belarussian weekly journal Наша Ніва (Our Field) in 1908–1915.

The article of Mikalaj K. Aĺchovik studies the peculiar traits of the Soviet national policy in Belarus and Russia in the mid and late 1930’s.

Dmitriy C. Matveichik’s detailed report is dedicated to the analysis on contemporary works on the problematics of the 1863–1864 Uprising in Belarus. This work clearly establishes the main tendencies on the Uprising’s studies in Belarus, also examining the basic themes and major researchers. Special attention is given to the new sources on the Uprising (archives, memoirs, etc.) that are now being brought into the academic orbit.

Two works in the issue lie beyond the framework of Russian-Belarussian relations: the archival material on the construction of Russia’s southernmost railroad, provided by Alexander S. Senin, and the polemic article by Tatiana A. Matasova on the role of Sofia Paleologos in the court life of Moscow and in the invitation of Italian architects into Russian service in the late 15th century.

Jauhien S. Hlinski. Legends on the «Muscovite» origins of several szlachta dynasties in the historical discourse of the Grand Duchy of Lithuania in the 17th–18th century

Andrei V. Macuk. The relationship of magnates and the szlachta of the Great Principality/Grand Duchy of Lithuania with Russia in 1733

Vadzim V. Anipiarkou. Under the mask of collaboration: conflicts between Russian forces and pro-Russian confederations in the Great Principality/Grand Duchy of Lithuania in 1792–1793

Andrei V. Unuchak. Russia and the Russians on the pages of the Наша Ніва («Our Field») Newspaper at the dawn of the 20th century

Mikalaj K. Alchovik. Defining Traits of the Soviet National Policy in the Belarussian and Russian Soviet Republics in the mid-late 1930’s

Tatiana A. Matasova. Influence or Silence? Once more on the role of Sophia Paleologos in the court life Ivan III and the question of her participation in the invitation of Italian masters to Moscow