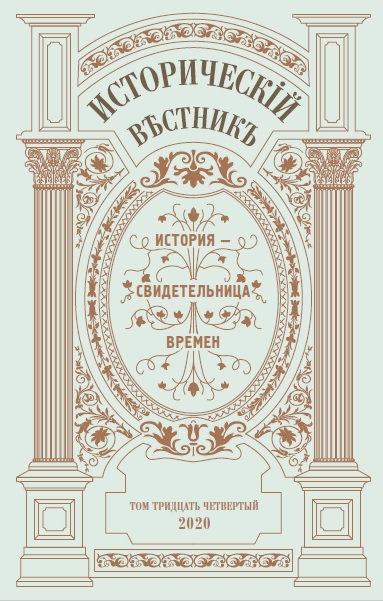 The current issue of the Historical Reporter touches upon the last half century of the Russian Empire and the first half century of the Soviet era. Highlighted are some problems in connection to economics, social moods and attitudes, domestic and foreign policies, wars, revolutions, reforms, cross-ethnical relations and emigration.

At the end of the XIX c. Nikolai Leskov was a regular author of the «Historichesky Vestnik» magazine. An article by Denis E. Firsov is dedicated to Leskov’s publications. The analysis shows his great interest in historical thematics and unique writing style.

Among the most debatable questions in modern historiography, is an estimation of the level of the Russia Empire development in the XX c. This fundamental question is highlighted in Vladimir V. Polikarpov’s article. The author demonstrates how assessment of the Navy Force gives opportunity for comparative evaluation of economic and cultural development levels of Russia, its allies and enemies.

The famous Soviet novel «And Quiet Flows the Don» has been translated to many languages. Andrey V. Venkov in his article shows some previously unknown facts through his main hero protagonist biography.

The Crimean Tatars have been affected by many factors during the Inter-War Period. The demographics of Crimea are among the highly debatable questions in world historiography. The article by Salavat M. Iskhakov shows various numbers of population and the Crimes Tatars attitude towards census surveys in general.

Highly polemic and of a great interest are the studies depicting the lives of Russian Empire political emigrants in Europe in 1920–1930’s. С. Kumuk in his article based on a range of valuable archival sources, analyses lives of political emigrants from the North Caucasus in Europe during the Inter-War Period, as well as the mass fatality of Highlanders in the valley of the river Drava in 1945.

In the article by Vladimir A. Nevezhin and Ekaterina S. Saprikina, the authors examine studies by Russian historians published in 2015–2020 which aim to find the reasons for the Soviet Union victory in the Great Patriotic War, including the role of Stalin.

Reflections on the Stalin’s role in XX c. in the English speaking world, and the newest studies in western historiography on his role in the history of USSR are highlighted in the article by Ch. Read (UK).

In the «Scientific Life» section are two reviews: on the collective volume of works by foreign researchers dedicated to historian R. Suny (USA), and on a new book about the working class in Ukrainian SSR in 1946–1965.

In the «Sources» section for the first time are several documents, referring to the history of Soviet Union—United States relations (1926–1927), and as well as letters from Caucasian political emigrants situated in Berlin in 1942, uncovered by J. Shnelle (Germany).

Denis E. Firsov. Nikolai Leskov’s articles and certain materials about him which had been published in Historichesky Vestnik (1880–1895, 1908)

Andrey V. Venkov. Two Arrests of Harlampiy Ermakov — the prototype of the main character of the novel «And Quiet Flows the Don»

Salavat M. Iskhakov. More on the Population of the Crimean Tatars in 1917–1941

Vladimir A. Nevezhin, Ekaterina S. Saprikina. Factors of the Soviet Union Victory in the Great Patriotic War: the newest evaluations of Russian historiography (2015–2020)

Ch. Read. Some Reflections on Twenty-First Century Representations of Stalin in the English-Speaking World

On the History of Soviet Union–United States Relations: unknown documents (1926–1927)

«The Intrigues Are In Full Swing»: Five Letters of the Caucasian Political Emigres G. Bammat, A. Kantemir and H. Hasmamedov from the Berlin «Adloniada» in 1942