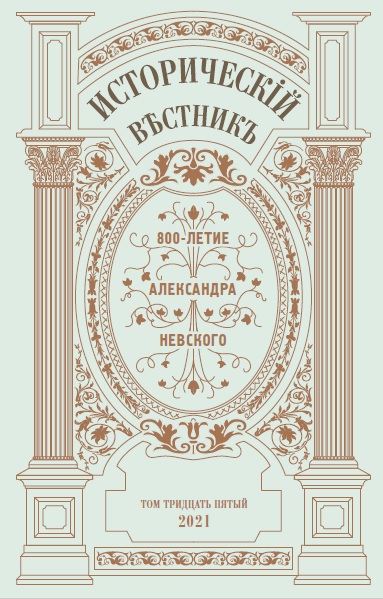 THE 800th ANNIVERSARY OF ALEXANDER NEVSKY

This year celebrates the 800th anniversary of Prince Alexander Yaroslavich (1221–1263) known as Alexander Nevsky after his victory on July 15, 1240 in the battle on the river Neva with the Swedes. His name has been one of the most remarkable in the history of Russia ever since. Throughout history, different circumstances contributed to the prominence of Alexander Nevsky. In the 14th–16th centuries, important role played the fact that he was a direct ancestor of the Grand Princes of Moscow who headed the unified Russian landss. During the time of Peter the Great —

it was the victory over the Swedes by 19-yearold Alexander Nevsky. During the Second World War, the 700th anniversary of the Second Great Victory of Alexander Nevsky, which had taken place in the Battle on the Ice at Lake Peipus (Chudskoye) on April 5, 1242, revived the memory of him again. In his last decade, Alexander Nevsky was, both formally and actually, the first Russian Prince

to hold the thrones of Kyiv, Vladimir, and Novgorod. Although, according to the most popular opinion, Alexander is praised both as a politician and religious personality (one of the few rulers in Russia who were canonized), his activities have always been a controversial issue with scientists and journalists. This issue seeks to shed light on various topics relating to the life and memory of the renowned Russian prince.

The article by Anton A. Gorsky deals with the most controversial facts in the life of Alexander Nevsky: the importance of the greatest victories of Prince Alexander (Battle of the Neva, Battle on the Ice), as well as his relationship with the Mongol invaders. Vladimir A. Kuchkin studies in detail the course of military actions against the Swedes in 1240 and the Germans in 1240–1242, while Svetlana A. Maslova considers his political activities “on the Eastern front”. Yelena L. Konyavskaya dedicated her work to Life of Alexander Nevsky, an illuminated manuscript depicting his life and achievements. A group of authors, including Leonid A. Belyayev, Petr L. Zykov, Oleg M. Ioanissyan, and Alexey V. Sirenov, study the archaeological data and written documents on the burial of the prince. Two articles are dedicated to cherishing the memory of Alexander Nevsky. Andrey S. Usachev addresses the veneration of Prince Alexander at the Nativity of the Virgin monastery (where he is buried) in the 16th century. Andrey A. Bulychev unveils the history of the 18th century’s Order of Saint Alexander Nevsky.

Vladimir A. Kuchkin. Alexander Nevsky: the Victory on the Neva, Pskov Recaptured, the Battle on the Ice

Svetlana A. Maslova. Further to the Eastern Policy of Alexander Nevsky

Andrey S. Usachev. The Nativity of the Virgin Monastery in Vladimir and the Veneration of Alexander Nevsky in Russia in the 16th Century

Andrey A. Bulychev. On the Imperial Order of Saint Prince Alexander Nevsky and the Phenomenon of the Repeated Companionage in the Order Corporation in Russia in the 18th Century

Alexey B. Mazurov. Further on the History of the Veneration of the wonder-working icon of Nicholas of Zaraysk

Yakov N. Rabinovich. On the Signatures of the Members of Boyar Duma in the Council Code of 1649 and their Purchase of the Printed Copy of the Book