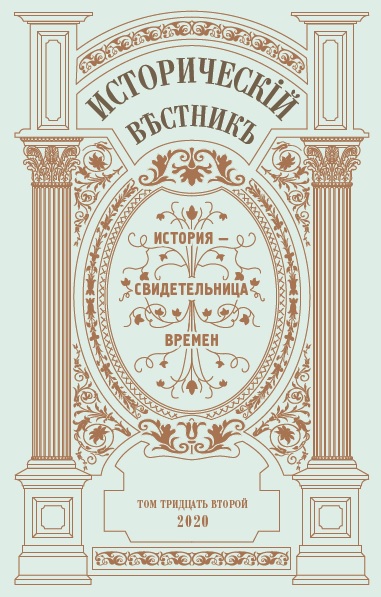 The current issue of The Historical Reporter covers a wide range of subjects, dedicated to 20th century Russia — the Russian Empire and the U.S.S.R. In the issue, you will find articles dedicated to various problems concerning domestic and foreign policy, economy, warfare, revolutions, reforms, and immigration.
Among the most controversial historiographic themes is the development of the Russian Empire and its achievements at the dawn of the 20th century. Vladimir V. Polikarpov’s article is dedicated to this particular problem.
Another resonating historiographic theme is the Soviet-Polish War, which took place after the fast-paced disintegration of the Russian Empire.
Vladislav A. Parkhomenko (Ukraine) examines this conflict from the perspective of the Polish-Ukrainian alliance.
Andrey V. Venkov dedicated his article to the participation of the Don Cossacks in that war, a chapter that remains largely unexamined by the academic community.
Another highly discussed topic is the early 1920’s famine in Soviet Russia: Nael V. Usmanov’s study examines the new data on the U.S. charities’ aid to the starving population of Bashkiria, Ekaterinburg, Orenburg, Perm, Ufa and Chelyabinskmregions in 1921–1923, which saved hundreds of locals’ lives.
The lives of the Russian émigré political leaders in 1920–1930s Europe remains a pertinent and highly polemical subject.
Johannes Schnelle (Germany) examines the relationship of the Azerbaijani political emigres with representatives of the German government in 1933–1939. This article introduces new archival materials that were previously unpublished and unexamined by the historical community.
Standing out amidst the contemporary historiographic discourse is the subject of the U.S.S.R.’s self-liquidation; Salavat M. Iskhakov’s article characterizes the economy and the
population’s quality of life in the Soviet republics of CentralAsia, the perspectives of their socio-economic development, spiritual life, their national and religious consciousness, as well as the actions of the top Moscow and republican leaders in the 1980s.
Junbae Jo’s (South Korea) article examines the way Perestroika and the collapse of the Soviet Union were reflected in South Korean historiography.
In the Historical Thought section, the reader will find J. Lami’s review on a new book about the Crimean War authored by O. Figes’ (a well-known British historian, who authored several monographic works on Russia). The book in question was published in English in 2010 and in Italian in 2015. The section also contains a review by the Caucasus Studies specialist G. Kubuk (Turkey) on M. Vachagaev’s monography, dedicated to the little-known Caucasus Mountains’ (Gorsky) Republic.
In the Sources section, you will find the final part of M. Phillips Price’s book My Reminiscences of the Russian Revolution, published in London in 1921, as well as previously unknown photographs that have to do with Soviet-Ottoman relations (1920).
Alexey E. Titkov
Editor-in-Chief of the Historical Reporter

Vladimir V. Polikarpov. Measurements of Russia’s economic growth in the early 20th century and the problem of sources

Vladislav A. Parkhomenko. Polish–Soviet War in 1920: The Ukrainian Factor

Nael V. Usmanov. «Women in tears pleaded to enlist their children for a food ration» (Ural Newspaper about the Operation of the American Relief Administration in 1921–1923)

Johannes Schnelle. «The enemy of my enemy»: actions of Azerbaijan «Musavat» party in Germany (1933–1939)

Junbae Jo. Towards a New Modernity: Korean Historiography of Perestroika and the Collapse of the Soviet Union

«My Reminiscences of the Russian Revolution» by M. Philips Price