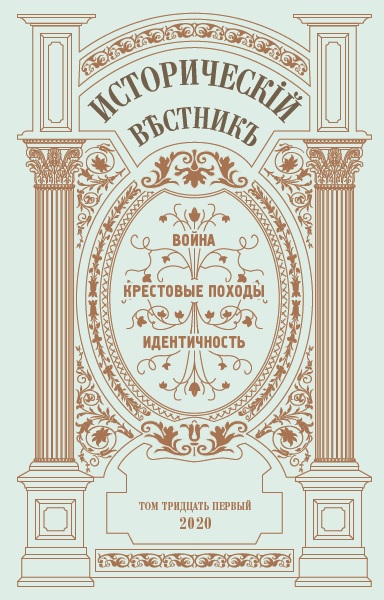 IDENTITY AND SELF-IDENTIFICATION FACTORS DURING THE CRUSADES

The Historical Reporter’s first issue of 2020 is dedicated to the history of the Crusades. The Crusades are undoubtedly among the most controversial and complex chapters in human history. This historical period is still used by various political and religious entities in order to construct an appalling image of a «historical enemy» or to cement the «historic trauma/historic debt» imprint in society’s collective conscious. In popular literature the image of the crusader balances between a political caricature and conspiracy theories: the latter are attested to by a plethora of low-class text, almost annually published, about the «secrets» of the Knights Templar).
Meanwhile, historical sciences have come a long and hard way, uncovering the complexity, pain and beauty of that era. Since the middle of the 19th century and up to this day we witness the publication of fundamental studies pertaining to socio-political and military history, religious life, archaeology, architecture and art, numismatics and literature of the Crusades. The study of this chapter of our history retain colossal potential, from the point of view of both — fundamental science, as well as its educational and social significance. Throughout the past years, The Historical Reporter — through the efforts of its editorial board and authors — devotes more and more attention to the research of inter-civilizational contact zones: to states, regions, phenomena and processes that — in one way or another — brought together various cultures and peoples of the East and the West. So far, we have been able to produce several — highly notable — collective research projects, namely our issues dedicated to the genesis of the Mongol and Ottoman Empires (edited by A.A. Gorsky and T.Y. Kobischanov respectively), to Christianity in the Middle East (edited by K.A. Panchenko), to the bilateral relations of Russia and the Ottoman Empire (Issue 30 of The Historical Reporter, supervised and edited by T.Y. Kobischanov). Currently we are working on a issue, dedicated to the Norman Expansion into Western Europe, Russia and the Mediterranean.
Another important milestone in our research is the current issue, supervised and edited by S.P. Brun. Issue 31 of The Historical Reporter is titled «War. Crusades. Identity». The dominant theme of the issue is the history of intercultural contacts between and the identity factors of various ethnoreligious groups that were directly involved in the Crusades. The issue examines in detail various themes pertaining to this subject: from numismatics and archaeology to the history of Latin-Byzantine contacts, the Mameluke conquest and destruction of Tripoli, Aragonese intervention into the Mameluke sultanate, the theme of the jihad in Arabic poetry in the 11th–13th centuries. Special value to our issue is added by the publication of original sources. The first one is the letter of Frederick I Barbarossa to Emperor Manuel I Komnenos, the translation and commentary to which were provided by P.V. Kuzenkov, as well as excerpts from Eastern Christian and Islamic texts on the fall and destruction of Tripoli (1289), brought together, translated and commented on by K.A. Panchenko.
Each new issue of our journal can actually be seen as a meticulously edited collective monography with an international group of authors. In the given issue you will find the articles, provided by authors from 5 countries — England, Scotland, France, Greece and Russia. These include articles provided by C. Hillenbrand (University of Edinburgh), K.S. Parker (University of London), S.V. Blizniuk, P.V. Kuzenkov, K.A. Panchenko (all of the Moscow State University), D.E. Kharitonovich (the Institute of World History of the Russian Academy of Science), N. Kannelopoulos (of the Hellenic Military Academy, Greece), S.L. Grigoryan (Université Paul-Valéry Montpellier 3, France), S.P. Brun (the Moscow Kremlin Museums).
On behalf of the editorial board I would like to offer my sincere gratitude to the entire collective of authors. We hope that this issue will be of value to the global academic community, and will be an important step in the continuing collaboration of The Historical Reporter with various international institutions and colleagues.
Alexey E. Titkov. Editor-in-Chief of the Historical Reporter

Carole Hillenbrand. Jihad Poetry in the Age of the Crusades

Pavel Kuzenkov. The Self-Identification of an Empire: the Version of Manuel I Komnenos

Nikolaos Kanellopoulos. Greeks, Bulgarians and Latins in conflict during the early 13th century in Thrace and Asia Minor

Svetlana Blizniuk. Latin Hellenism and Greek Latinism in the Kingdom of Cyprus in the 13th–16th centuries

Sergei P. Brun. Factors and Conflicts of Identity in the Antioch-Armenia Wars

Konstantin Panchenko. The Fall of Tripoli in 1289 in the Perception of Christian Communities of the Middle East

MATERIAL CULTURE OF THE LATIN EAST

Samvel Grigoryan. Named for Lewon the Young. The Medieval Name and the Date of Construction of Yilankale

Dmitry Kharitonovich. A Review of S.I. Lutchitskaya’s book The Crusades: Idea and Reality