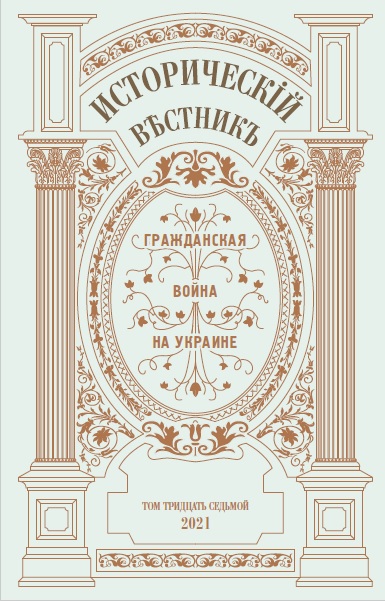 The current issue of the Historical Reporter brings to you a unique documentary publication — an extract from the Vrangel’ Collection kept at Hoover Institution on War, Revolution and Peace.

We are thankful to our American colleagues for saving such a unique documentary unit for further investigation. Special gratitude should be expressed to Olga Verkhovskaya-Dunlop, who in 1990 at Stanford offered an opportunity to examine the original papers. The acquaintance with these documents happened with help and support from Stanford professors — Terence Emmon and Sergey Vladimirovich Utekhov.

Worth mentioning is the fact that here published is a small part of the photocopies from Vrangel Collection available to the Historical Reporter Editorial Board. Beyond our current focus were left the telegrams from regional residents of «Azbouka» (it’s agents called each other by Cyrillic alphabet letters), as well as materials from European sources, which refer to the pre-revolutionary contacts of Bolshevik’s government.

As a result, the Editorial Board decided to concentrate upon the Ukrainian sector. The selection of the documents, classification and comments were brilliantly completed by Grigory N. Lanskoy. His personal article which follows is closely connected to the published source. The author distinguishes institutional, practical, and ideological layers of the Civil War in Ukraine discourse.

Aligned with the materials of the issue, it is shown that a significant role in «warming up» the war actions in Russia (1917–1920) can be assigned to foreign states. The publication prepared by Ruslan G. Gagkuev presents documents depicting the process of formation and actions of the French Mission in Siberia in November in December 1918, which supported the political institutions created by Alexander V. Kolchak. A similar theme is highlighted by Leonid F. Katsis in his article shows the creation of informational structures by Vasiliy V. Shulgin and Vladimir E. Zhabotinsky in 1917–1918 that aimed to reach certain intelligence goals.

Objective perception of the facts and sources on the history of the White movement demands a thorough reconstruction of the creative process behind them. The article by Lada R. Parieva analyses the documentation system, created by the anti-Bolshevists cabinet in the time of the Civil War.

The «Science Life» section offers two reviews also connected with the top themes of the issue. One of them is dedicated to the fundamental research by E.V. Pchelov, which carefully examines the death of Nicholas II of Russia and many of his family members and servants in Yekaterinburg. The second review highlights a unique publication of photo and video archives related to the events of the Civil War (1917—1922).

This issue also publishes an article of a popular science genre by Alexander P. Patsovsky and Yaroslav A. Patsovsky. They refer to the events of the Russo-Polish War of 1654–1667. In focus is the so-called, in Soviet historiography, of the «national liberation movement» under the command of Bohdan Khmelnytsky.

Leonid F. Katsis. Vasiliy V. Shulgin and V. E. Zhabotinsky in Kyivanin and Kyiv Mysl, 1917–1918: from the English intelligence to Alphabet (on the problem of building network information structures before and after the revolution)

«Kolchak’s dictatorship»: General Maurice Janin and the beginning of the work of the French military mission in Siberia in November-December 1918

Vladimir D. Ovchinnikov. About the approaches of civil and military historians to the study of the military history of Russia in the 18th century (reply to Professor of St. Petersburg State University P.A. Krotov)